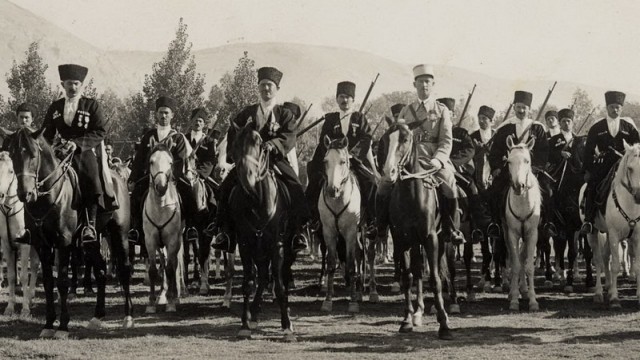 The Circassians were expelled of their ancestral territory (the Black Sea coast of the Caucasus, the Kuban and the southern part of the Stavropol Territory) as a result of the final conquest of the Russian empires of Circassia in 1861-64. Source: http://circassiaprince.livejournal.com/profile

According to official figures of the Russian authorities, 418 thousand Circassians were evicted, according to the Ottoman Empire’s Immigrant Commissions (“Mukhazhir Commission”), this number reached 2.8 million. "The Turks settled the Circassians in the provinces - large colonies were formed in the Balkans. In the war of 1877-78, the Circassians created many problems for the anti-Turkish coalition forces, but this war was lost to Turkey and the Circassians again had to withdraw from their places of residence.

After the end of the First World War, the French got Syria, where uprisings periodically broke out and the need for a constant presence of devoted troops was felt.

The French captain Philibert Collet was commissioned to form a squadron of Circassians.

In one of his letters he wrote: “I formed the 1st Circassian squadron in Algeria in 1922. During the Syrian uprising of 1925-1926. the group grew to eight squadrons, to this day remaining in this composition under my command. Each squadron is under the command of a French officer, as well as his deputy - a Circassian officer. The squadron consists of four platoons, each of which is commanded by a Circassian officer. Accounting is carried out by four French non-commissioned officers.

Squadrons are under the control of our army, their budget is provided by the countries participating in the mandate.

We are talking about irregular troops, that is, any Circassian who wants to volunteer for military service can come to the officer, commander of the squadron, or his deputy. Moreover, he must have his own fully equipped horse, since the cavalry unit .... "

Of course, all Circassians wore a national headdress - a black astrakhan hat - or a cap - of a cylindrical shape, lined on the bottom with light blue cloth, with two crossed galloons of light yellow color, and gold - with command personnel. Circassians never parted with either daggers or lashes.

The Circassian standard is located in Paris, in the prestigious hall of the Museum of the Army banners. He is rightly worthy of this honor. On a square panel of green silk framed with gold fringe, on one side there is an inscription in Circassian embroidered with gold thread: "YAPEQHE TCERQUES" (Circassians, go ahead!); seven stars symbolizing the seven main Circassian tribes frame it in a semicircle above, and below: “TCERQUES CHIV SEVTINME YA QUP” (Circassian light cavalry regiment). All four corners of the banner are decorated with embroidery. On the other hand, inscriptions are already in French: “Circassian Squadron Regiment”, as well as in two columns the main victories are recorded - Hajilar, Jebel Druz, Kalaat Jendal, Majd al-Shems, Katana, Jebat al-Khashab, Guta , Maaraba, Antilivan, Darija.

In July 1929, Captain Collet, who never attached particular importance to the charter, but treasured the corporate spirit of his cavalrymen, decided to equip the army with a dress uniform, for which he chose the national Circassian costume that his people had worn before, usually outside the office hours. This is mainly a blouse (beshmet ) - black in winter and white in summer, with a straight collar, fastens on the chest. A Circassian coat is put on this blouse - a black frock coat without a collar, with false cartridges (gazyryam ) on the chest on both sides, above which on the right is the emblem of the Circassian regiment. Pants and boots are black. A white hood is thrown over his shoulders - a cap that is tied around the neck and the edges of which lie back ...

As Captain Collet writes in a letter addressed to Major Buccois, it was in this form that the Circassian squadrons defiled at the last inspection inspection of Marshal Franche d'Espere.

In 1930, the regiment badge was also approved.

When Collet became general, he wore a badge on his uniform and after 1946, when the regiment ceased to exist, the badge is depicted on the tombstone of the general. "