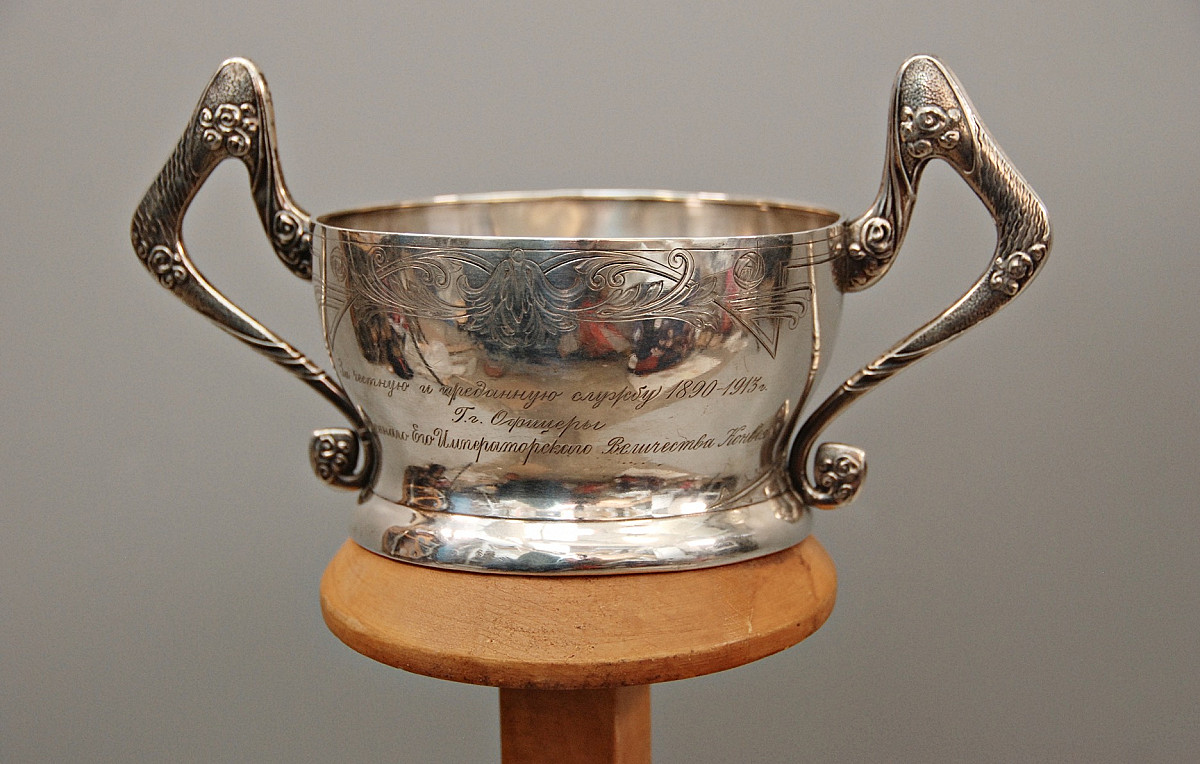 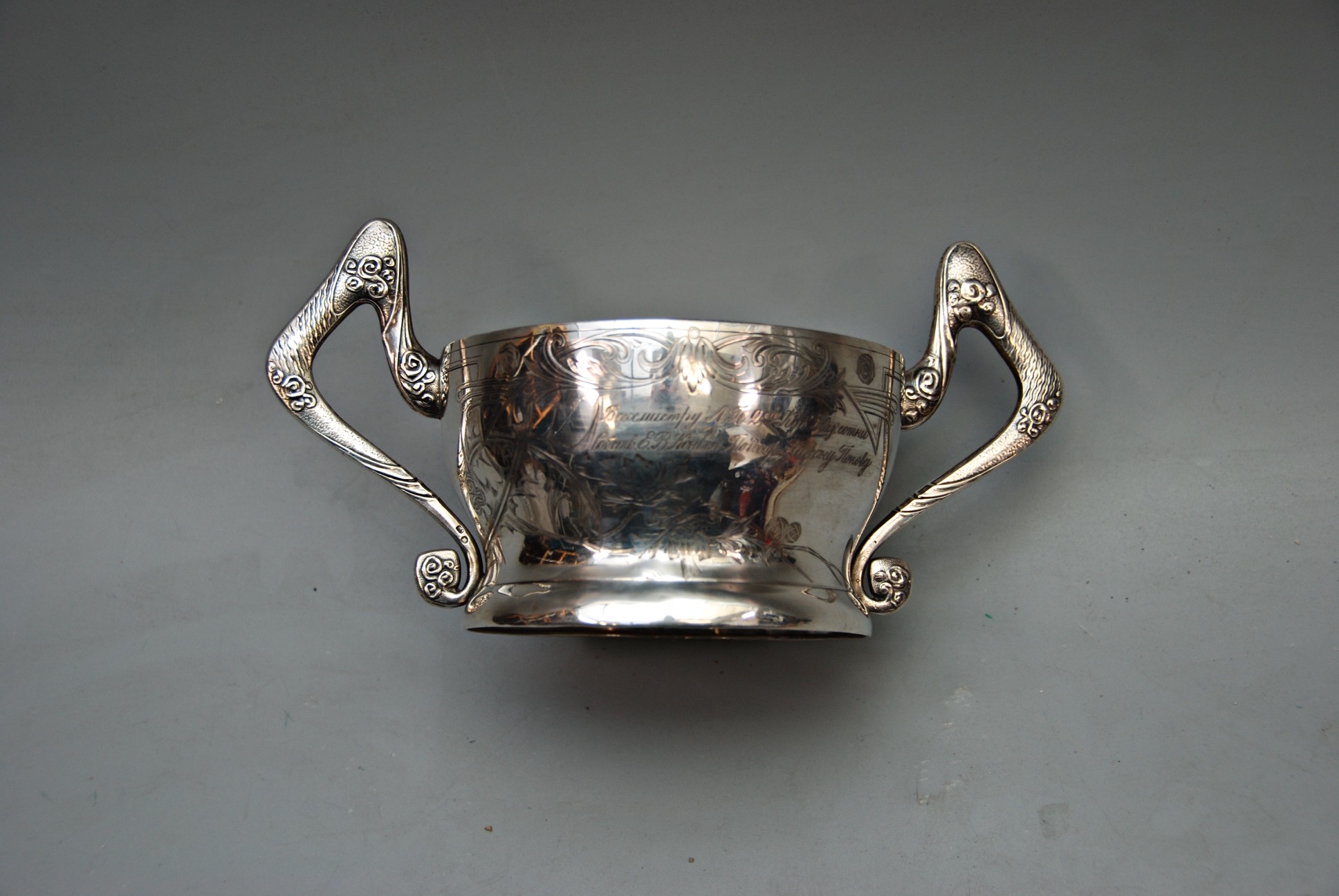 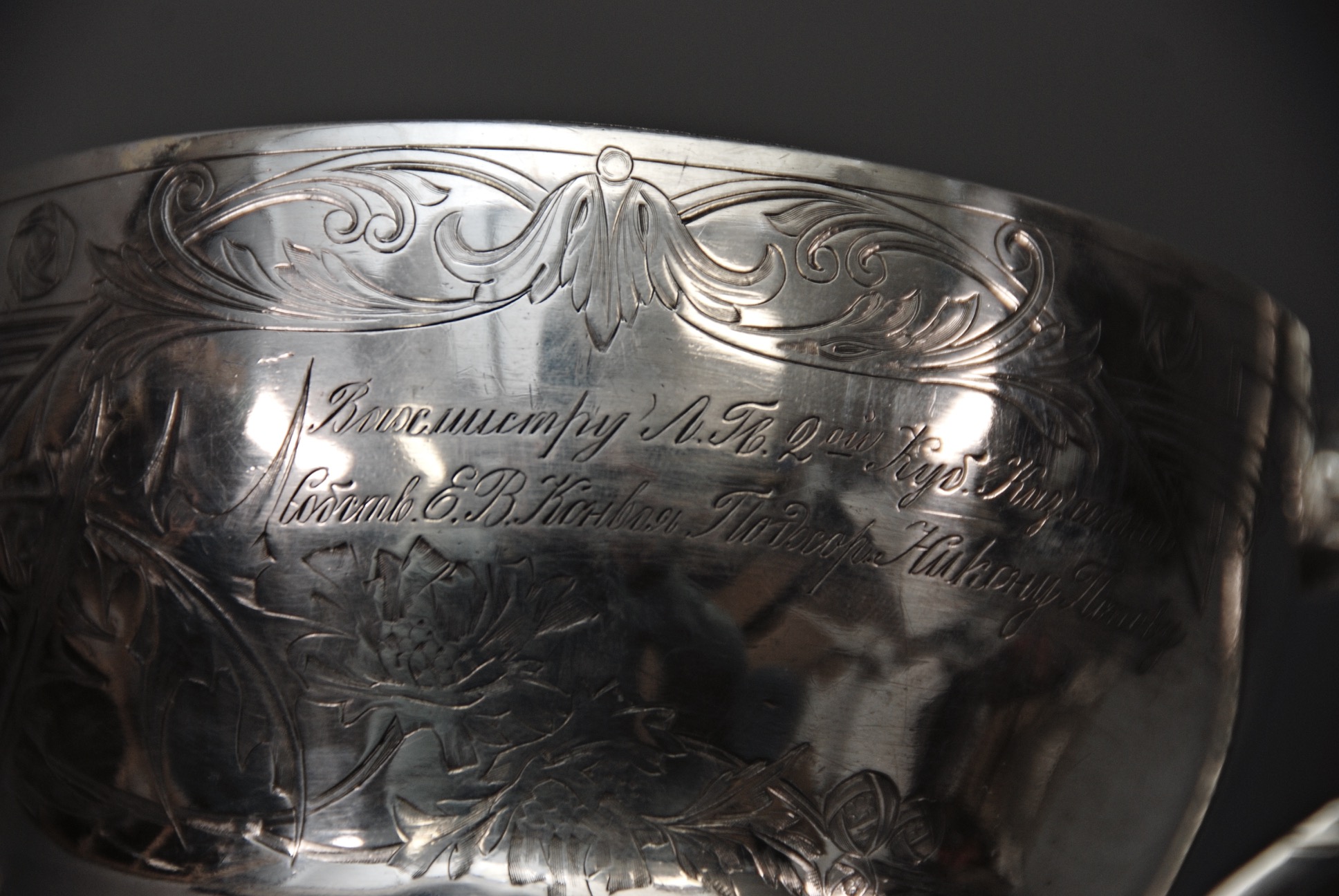 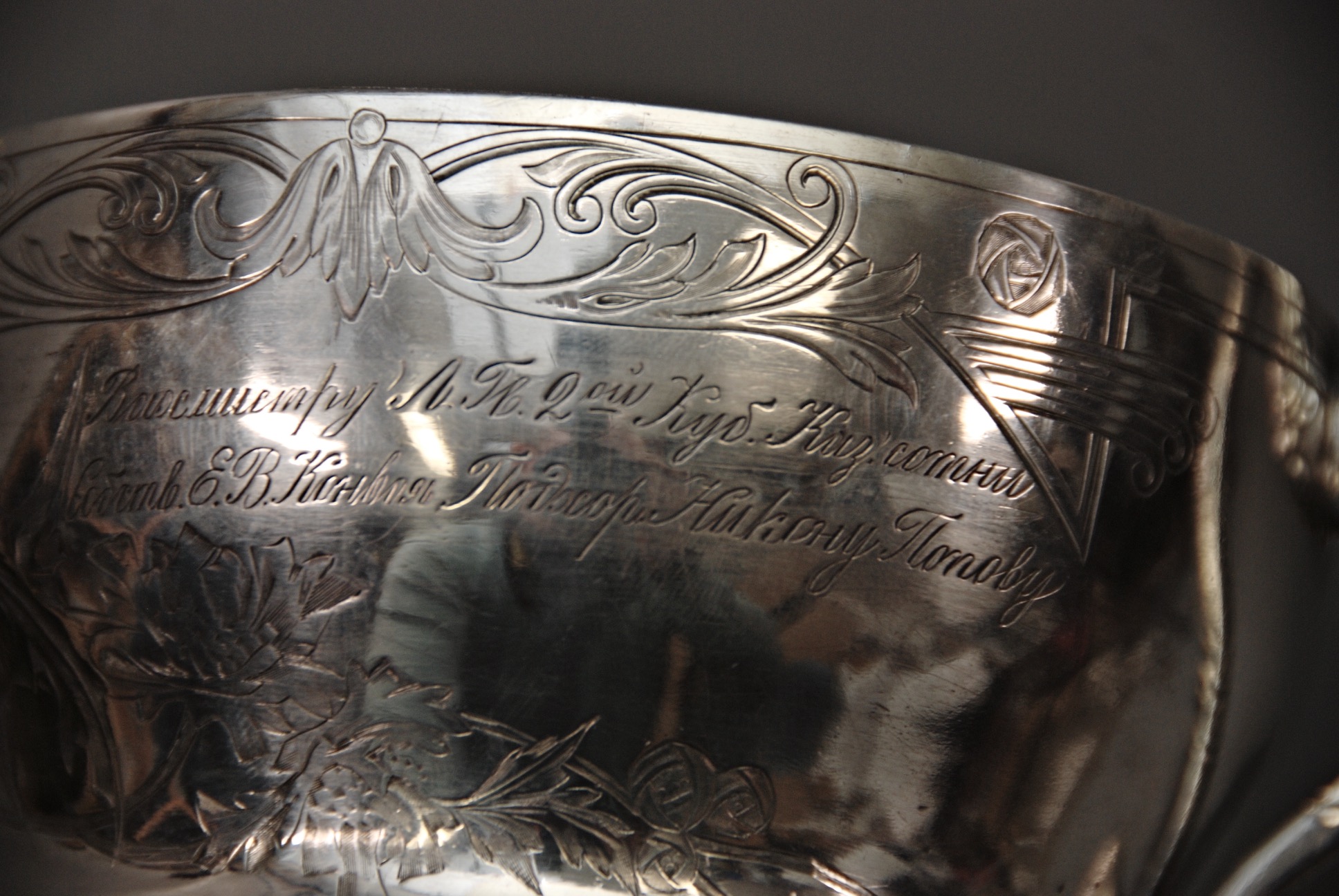 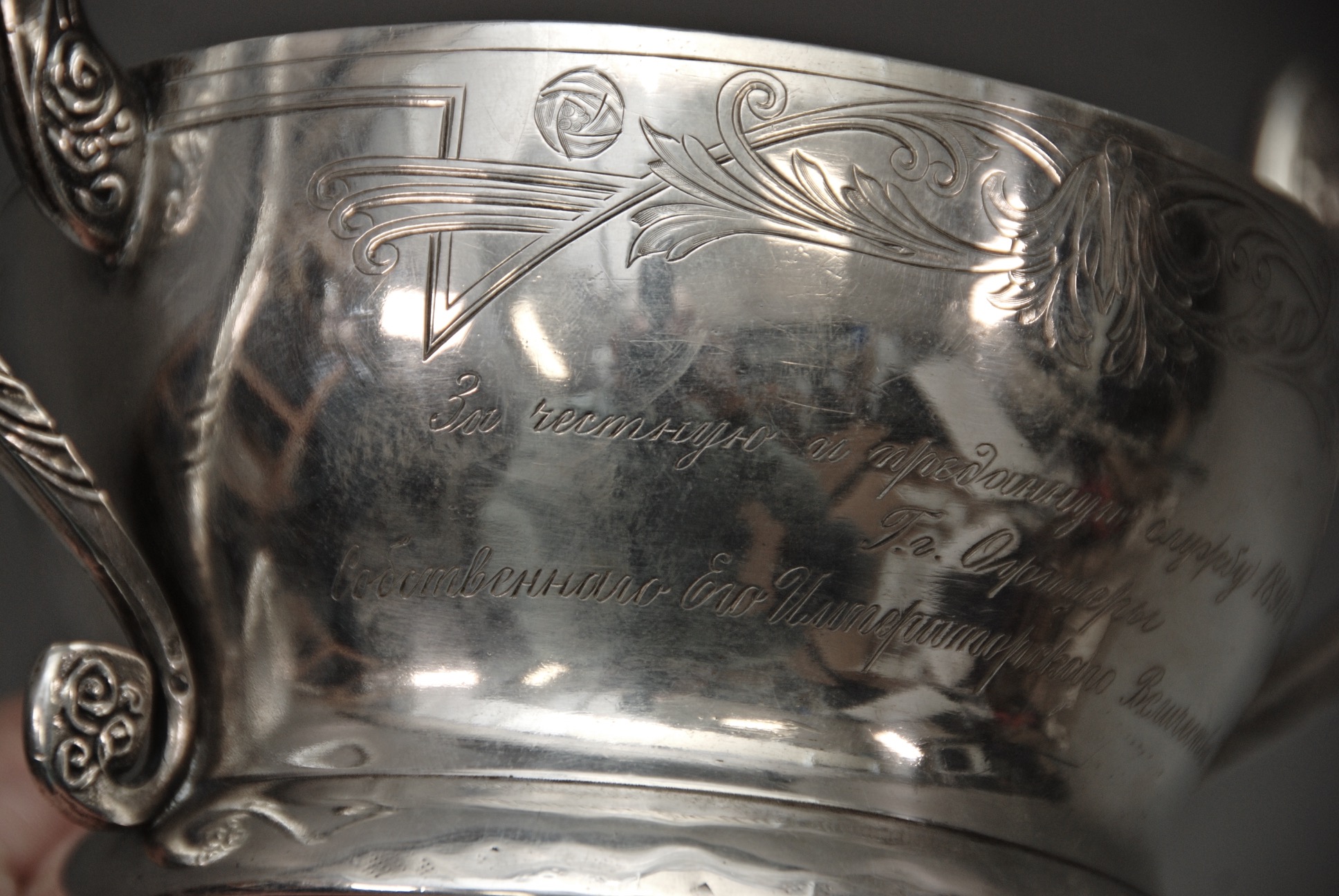 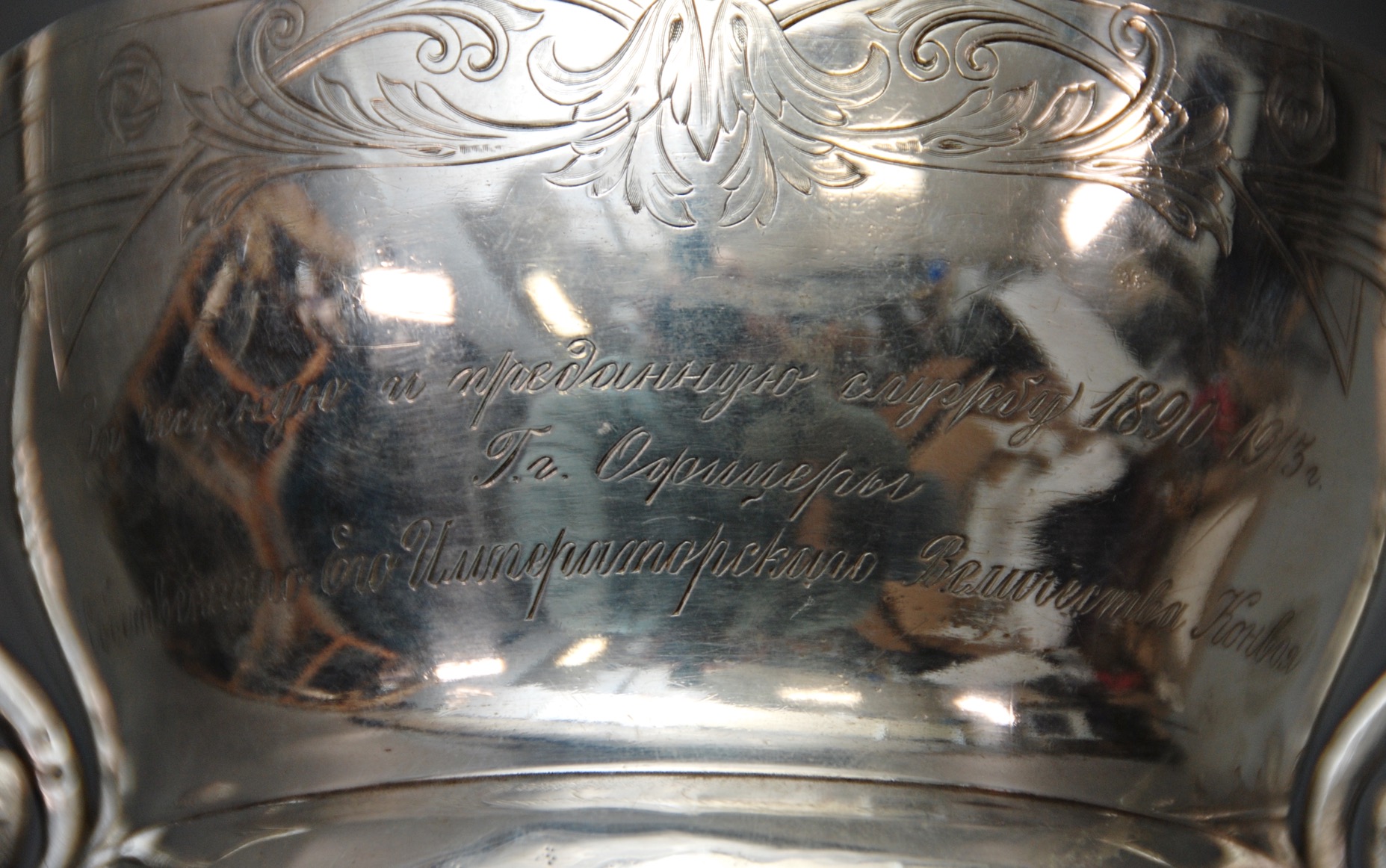 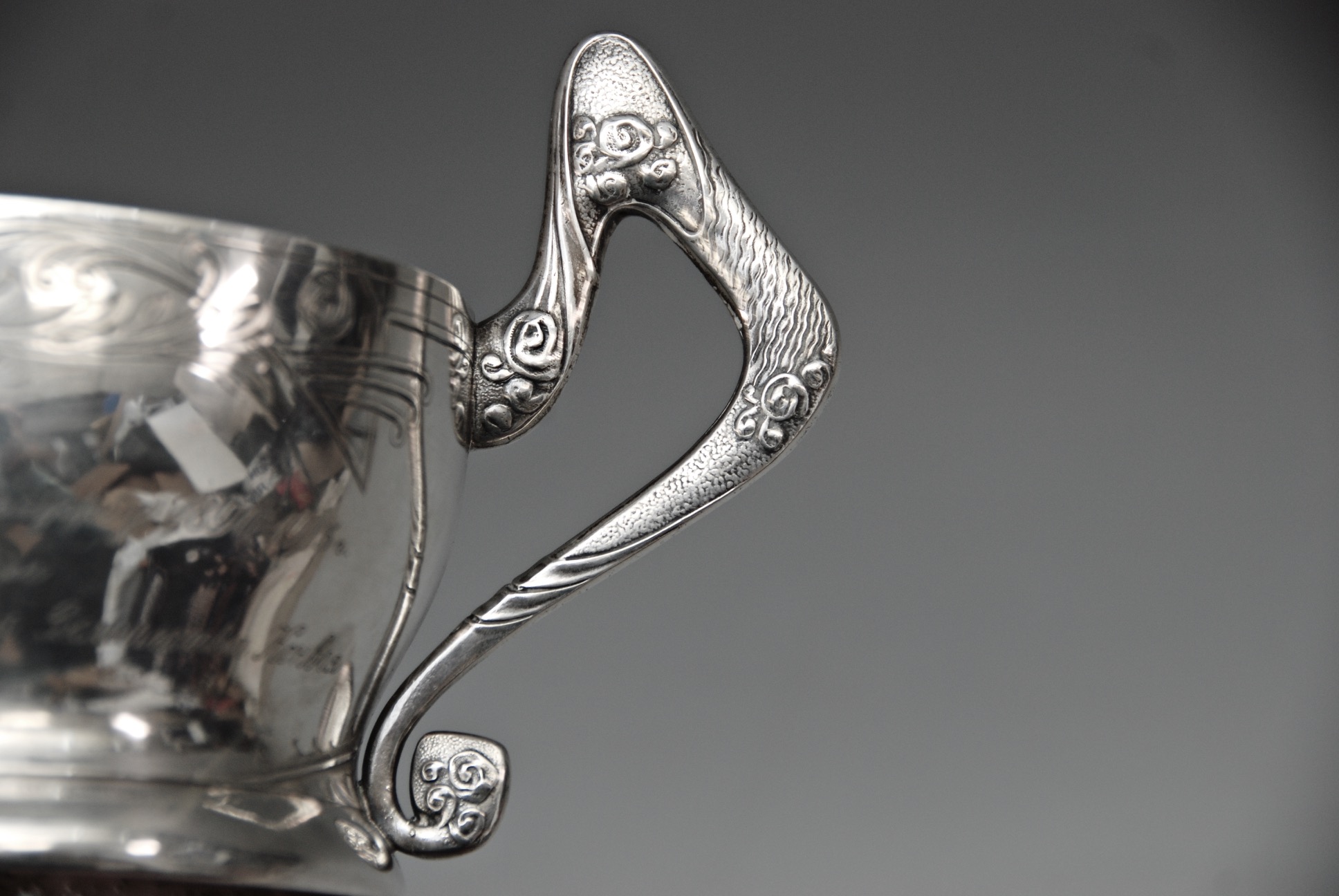 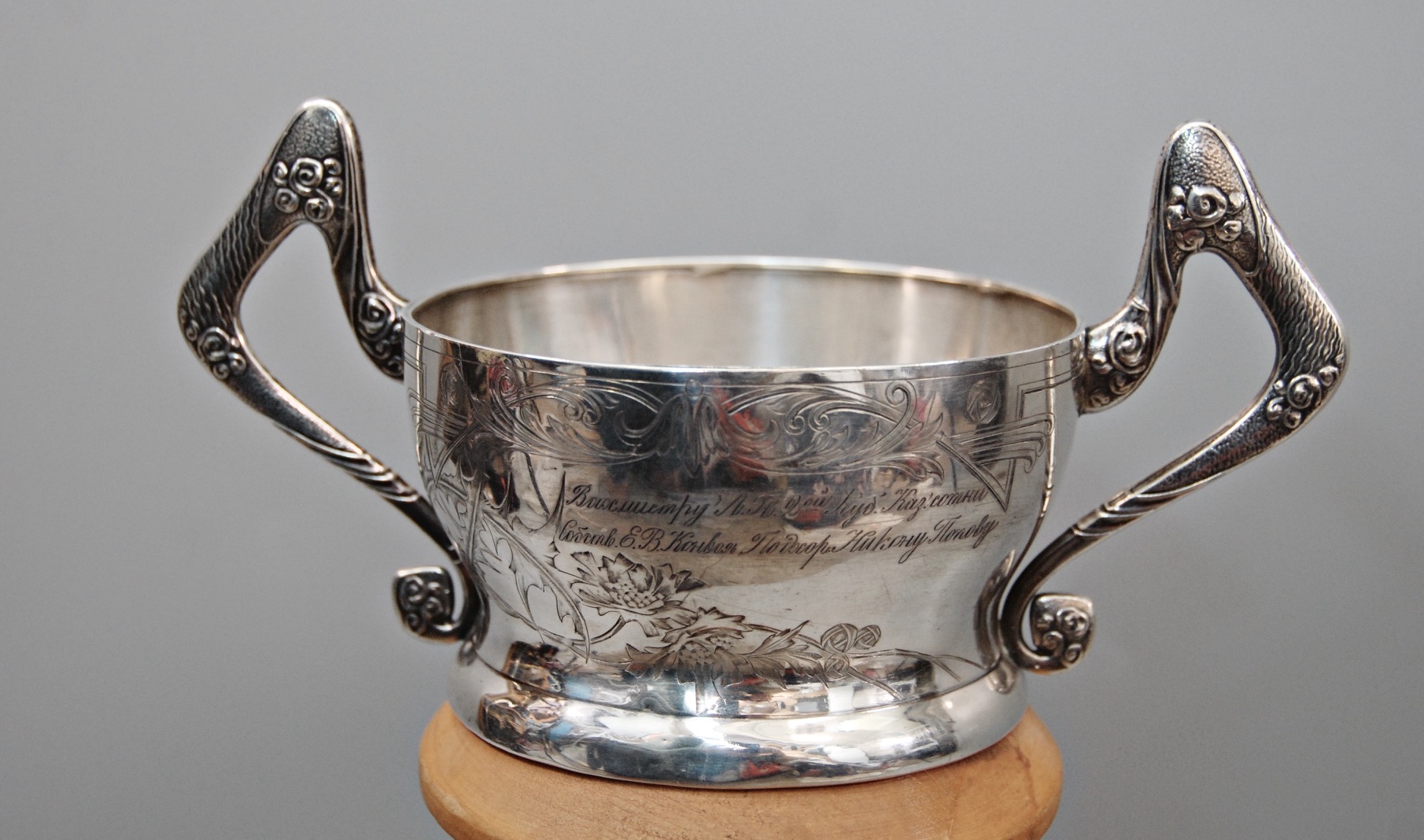 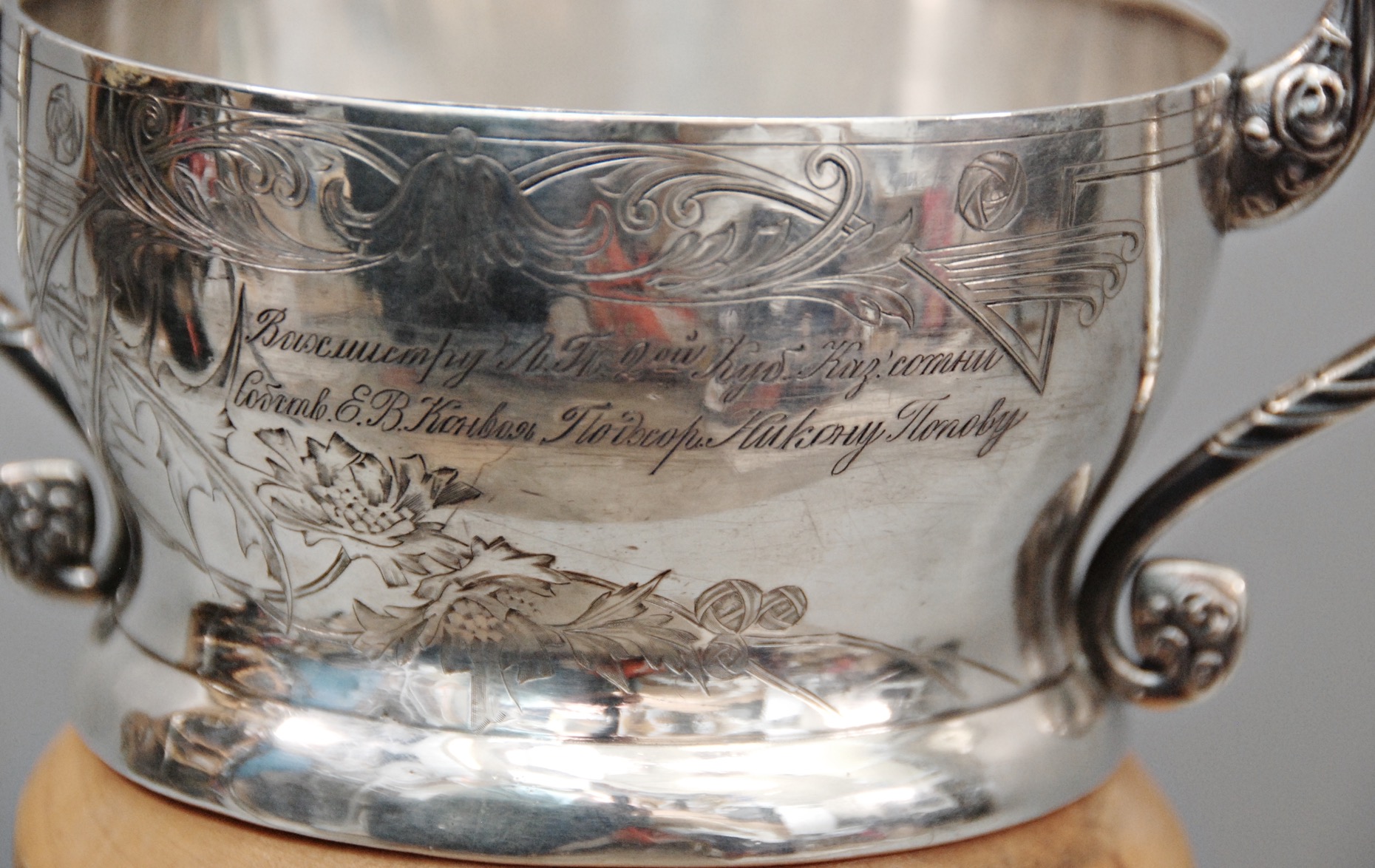 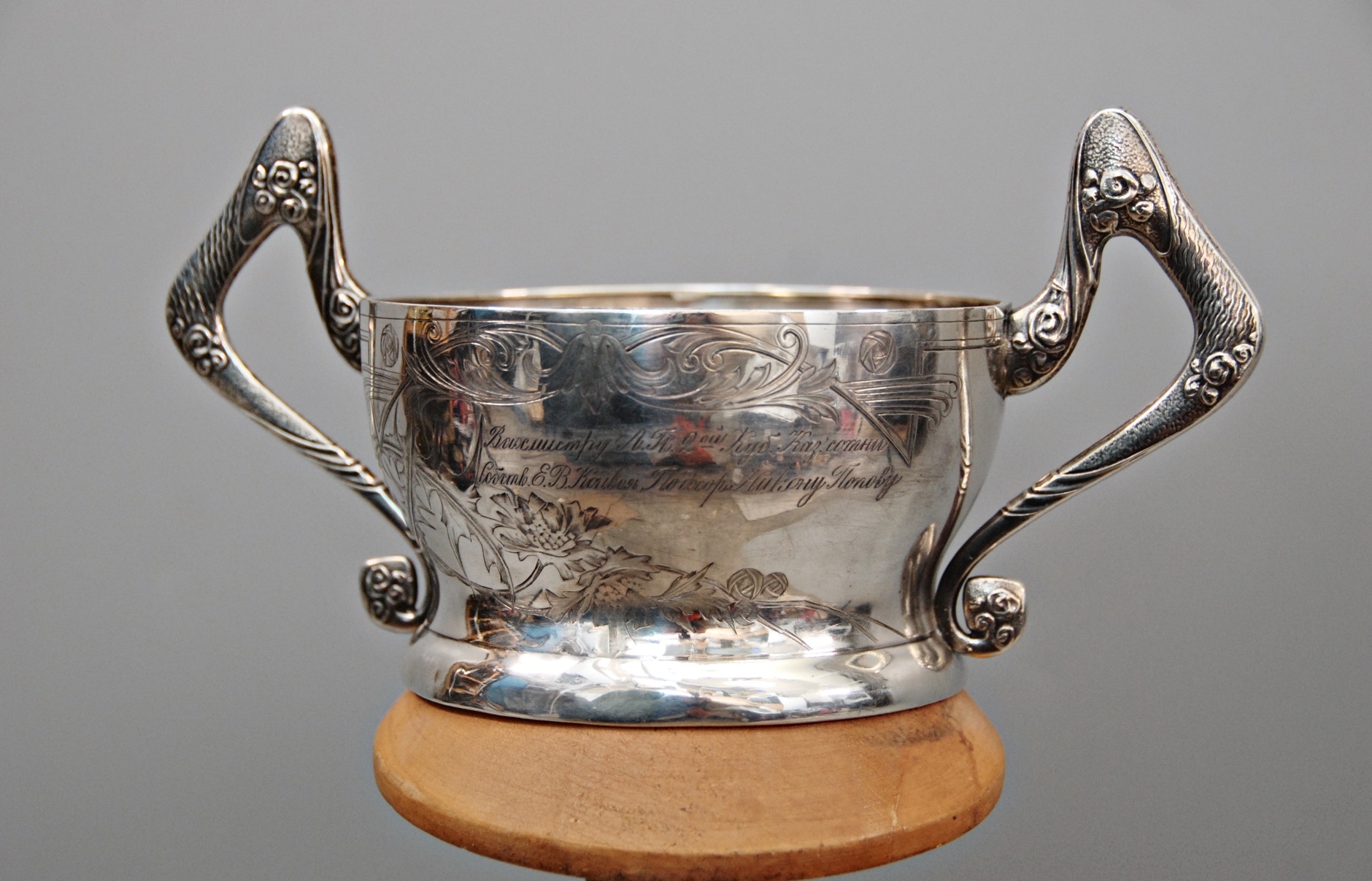 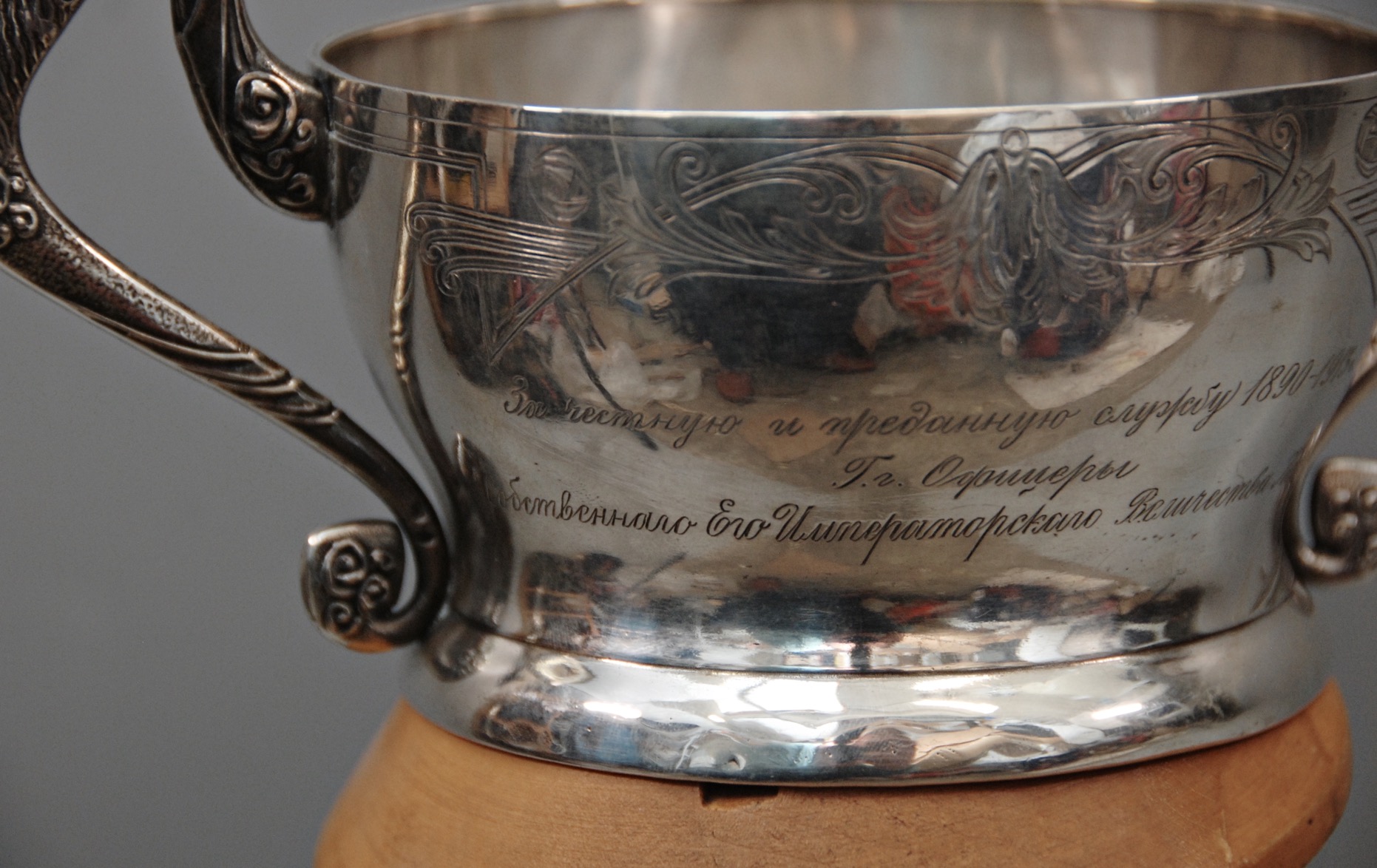 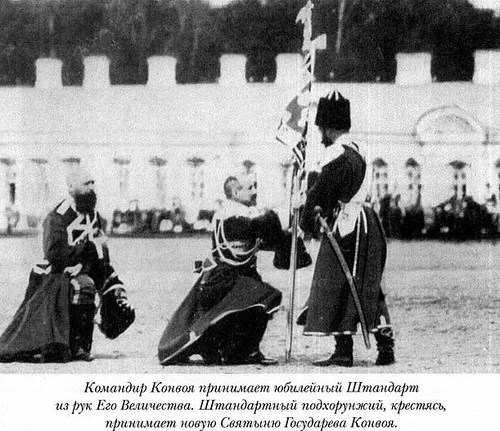 Silver bowl (bratina) , presented to the sergeant-servant Nikon Popov in 1913 on the occasion of his retirement after 23 years of service in His Imperial Majesty's Own Convoy. Nikon Popov was the second longest serving officer in the history of his service in the Convoy. Only the sergeant, the senior trumpeter of His Majesty Zakharchenko, served longer than him. Nikon Popov took part in the honorary procedure of nailing the regimental standard to the staff together with Emperor Nikolai II and Tsarevich Alexei on May 17, 1911, on the 100th anniversary of the Convoy. (Book of B.E. Frolov Celebrating the 100th anniversary of His Imperial Majesty's Convoy.) The honorary farewell to Nikon Popov's retirement is also described there, during which this silver bowl was presented to him. After his dismissal in 1913, he was a Ataman of stanitsa in the village of Temizhbekskaya, where he was from. Then he took part in the white movement, immigrated to France. On both sides of the bowl there is an inscription “For honest and loyal service 1890 - 1913 G.G. officers of His Imperial Majesty's Own Convoy to Vakhmistru L. Gv. 2nd Cub. Kaz. sotni of Own. E. V. Konvoya Podhor. Nikon Popov ". «За честную и преданную службу 1890 - 1913гг Г.г. офицеры Собственного Его Императорского Величества Конвоя Вахмистру Л.Гв. 2-ой Куб. Каз. сотни Собств. Е. В. Конвоя Подхор. Никону Попову». Silver, hallmarks of the 13th Moscow artel, weight 300g. Height 11.3cm, width - 21.8cm